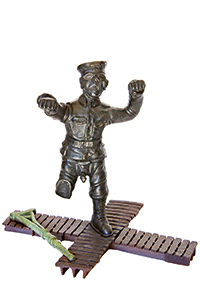 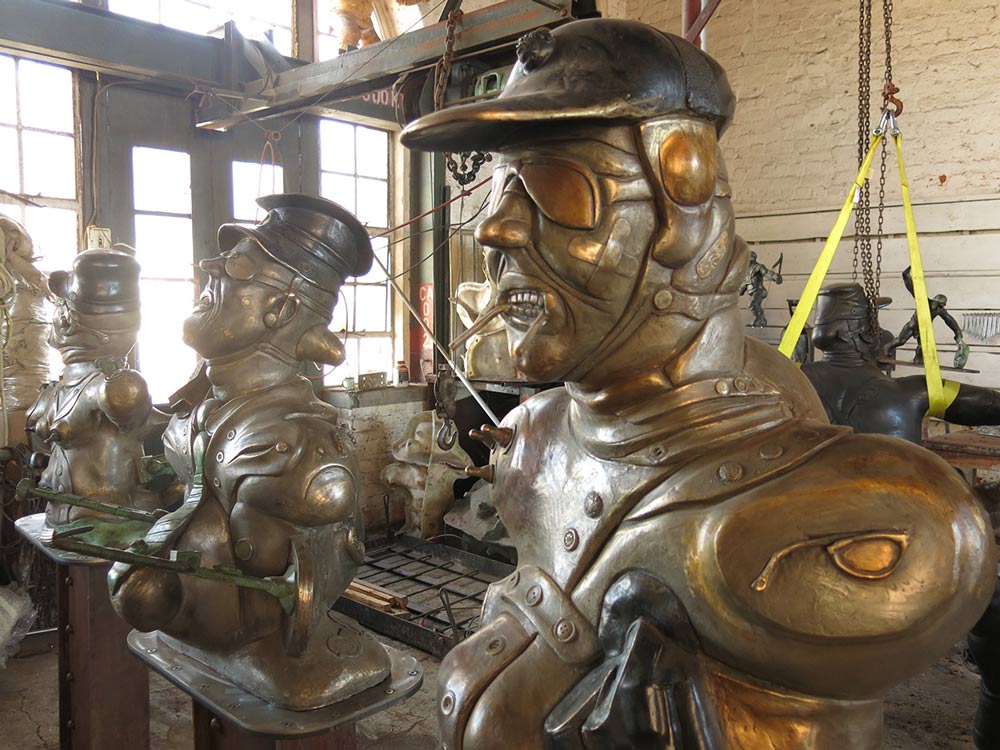 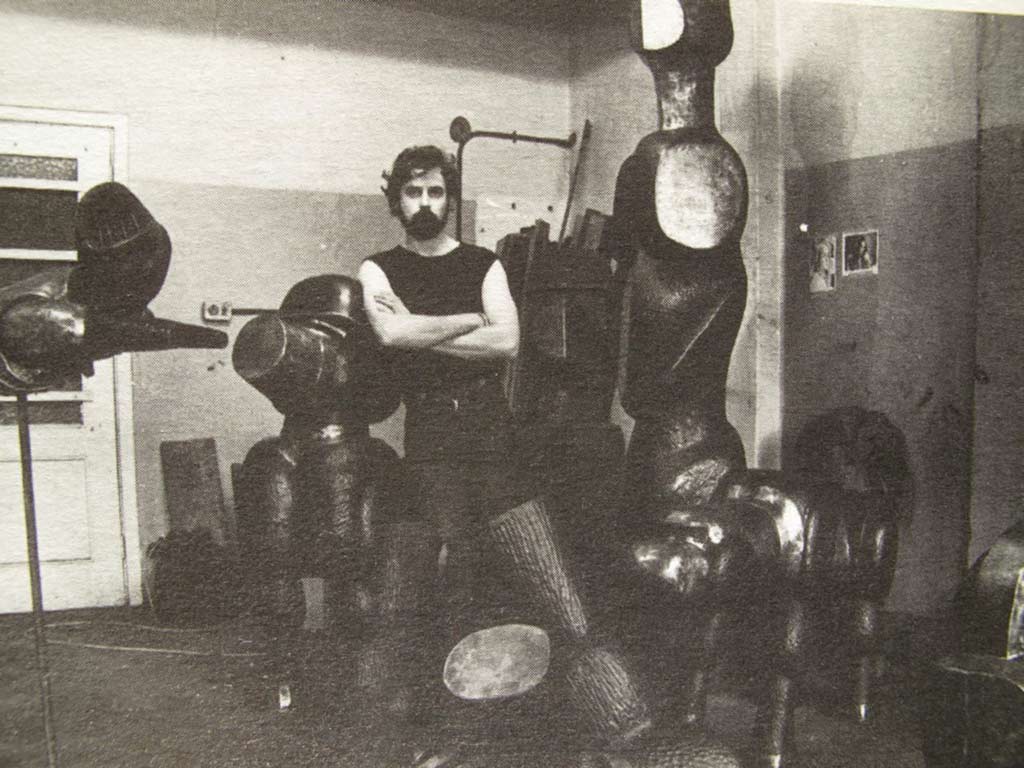 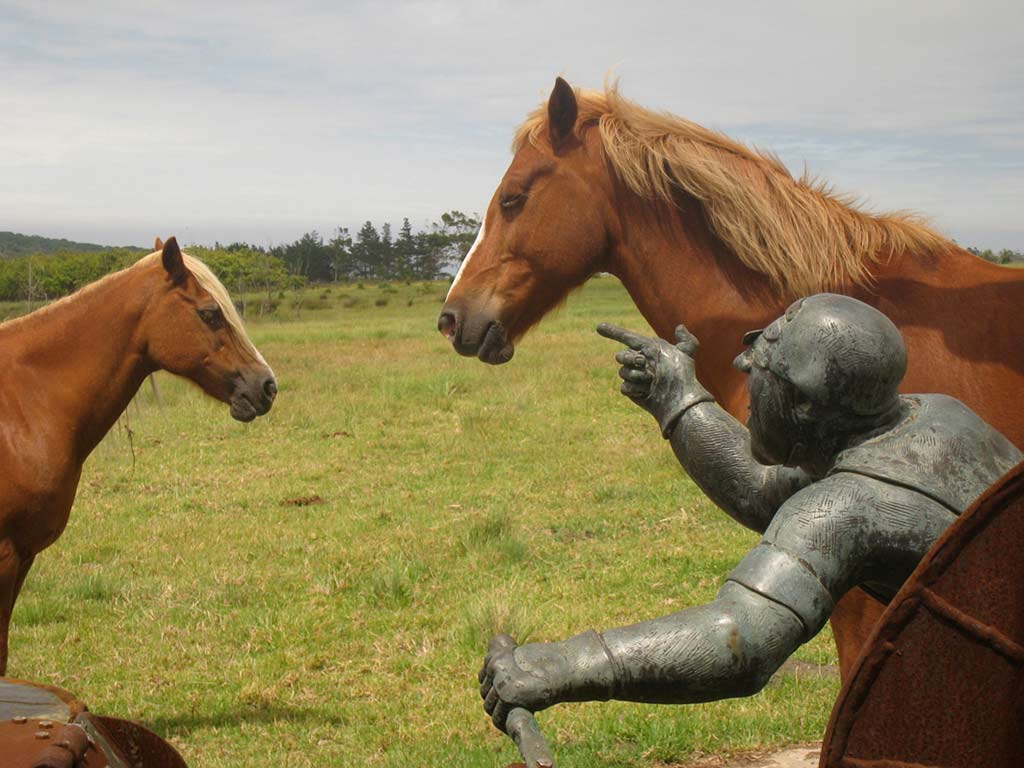 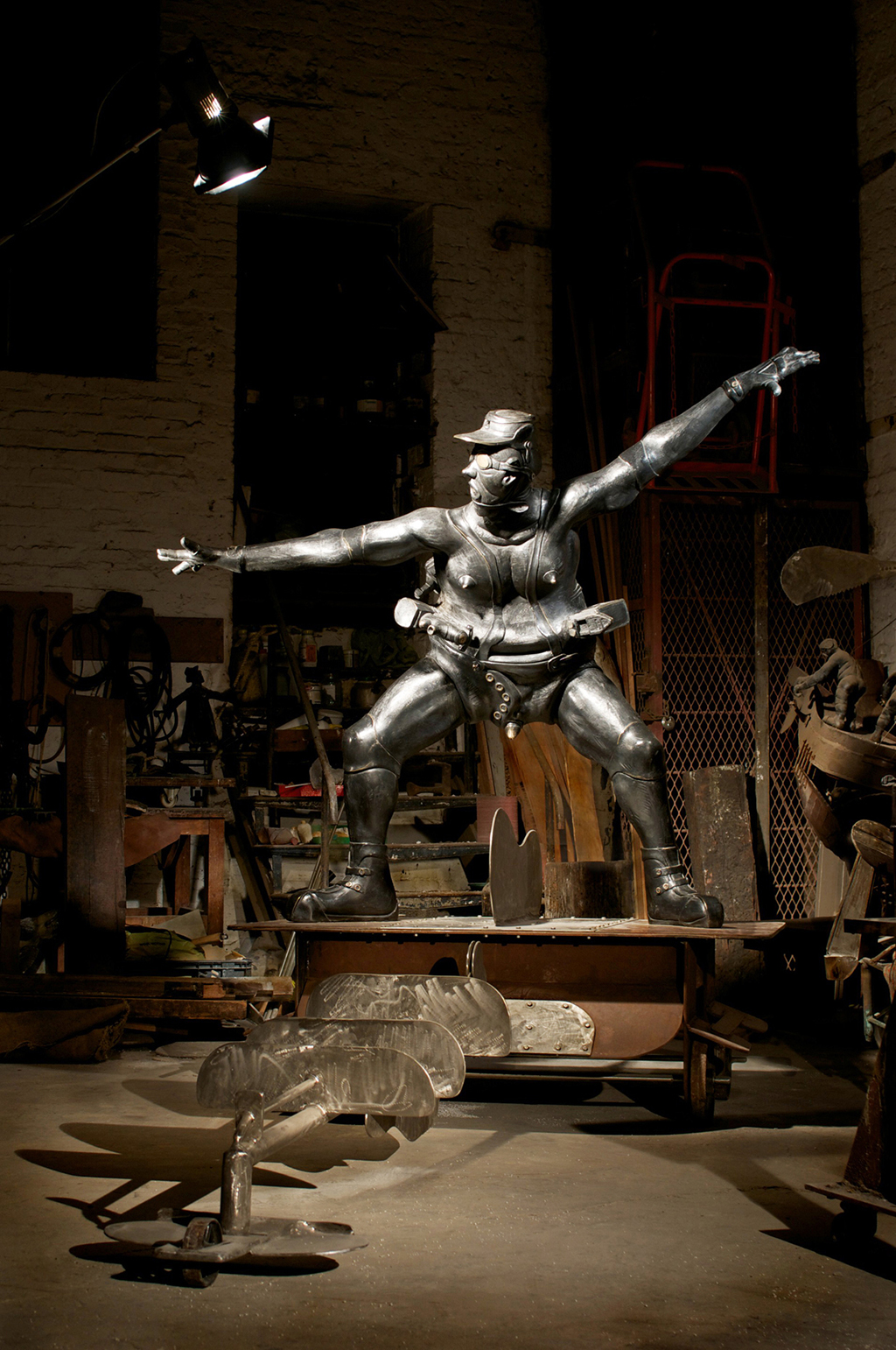 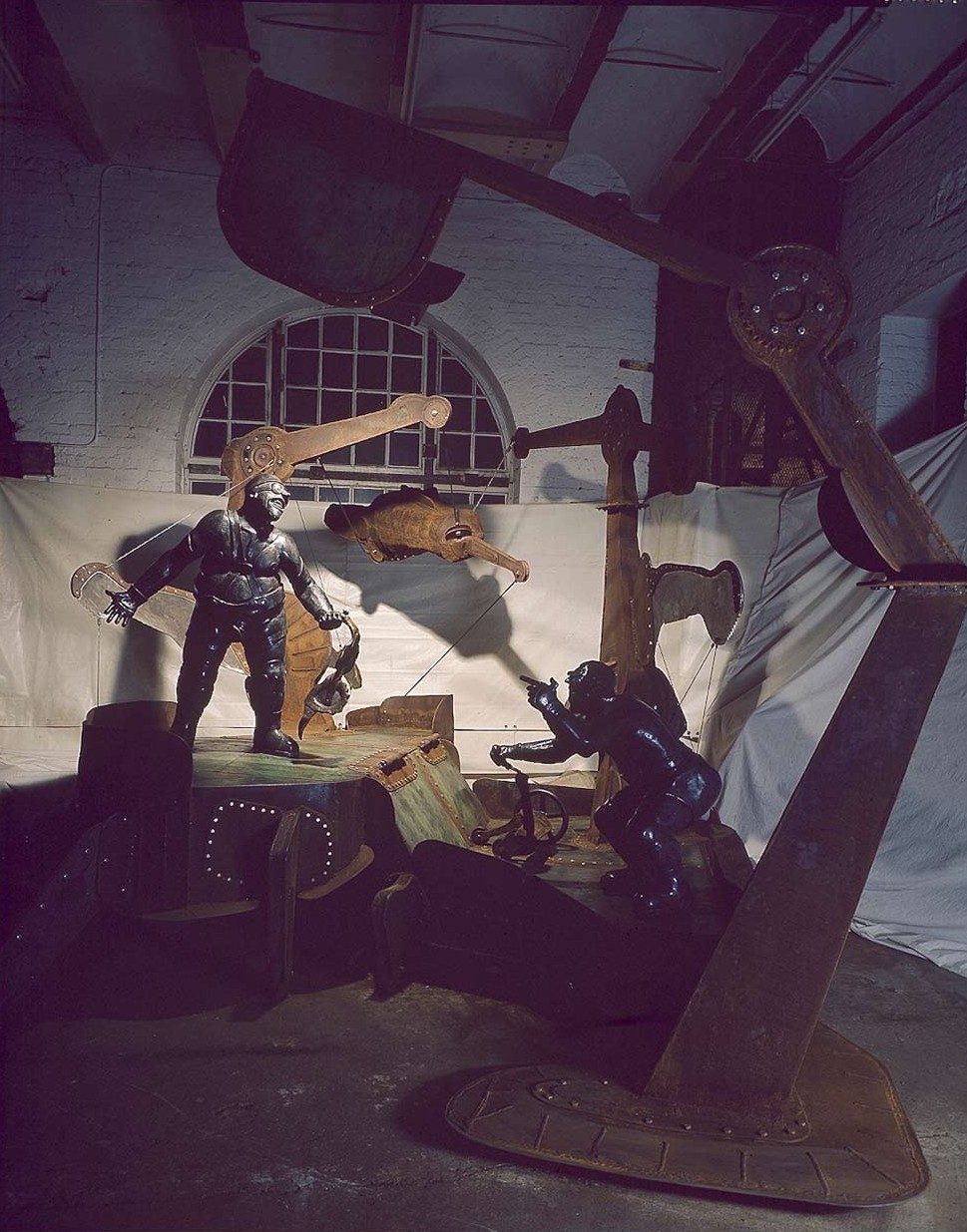 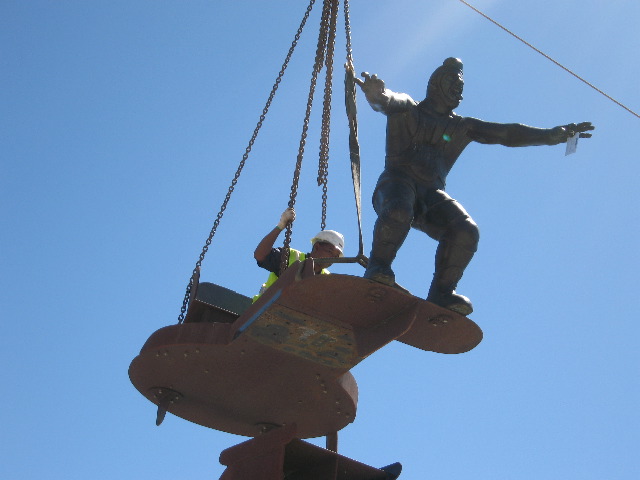 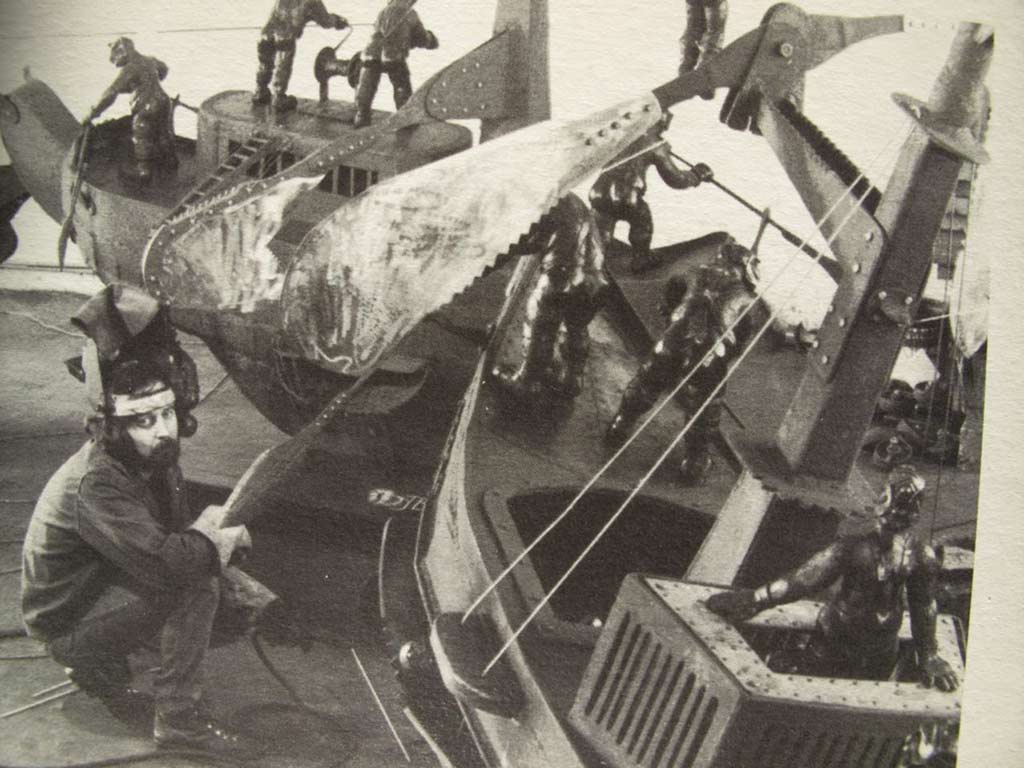 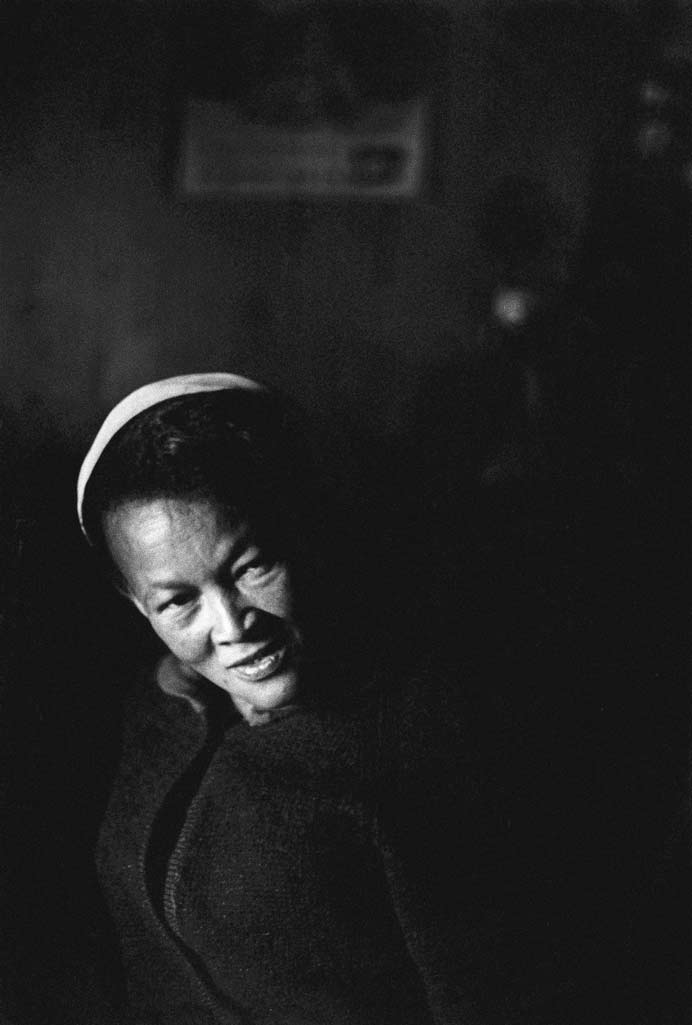 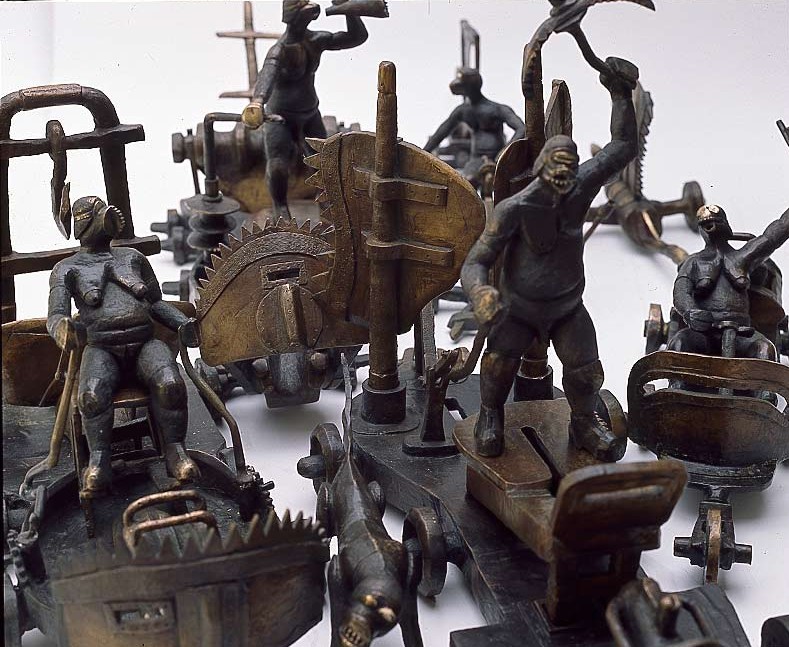 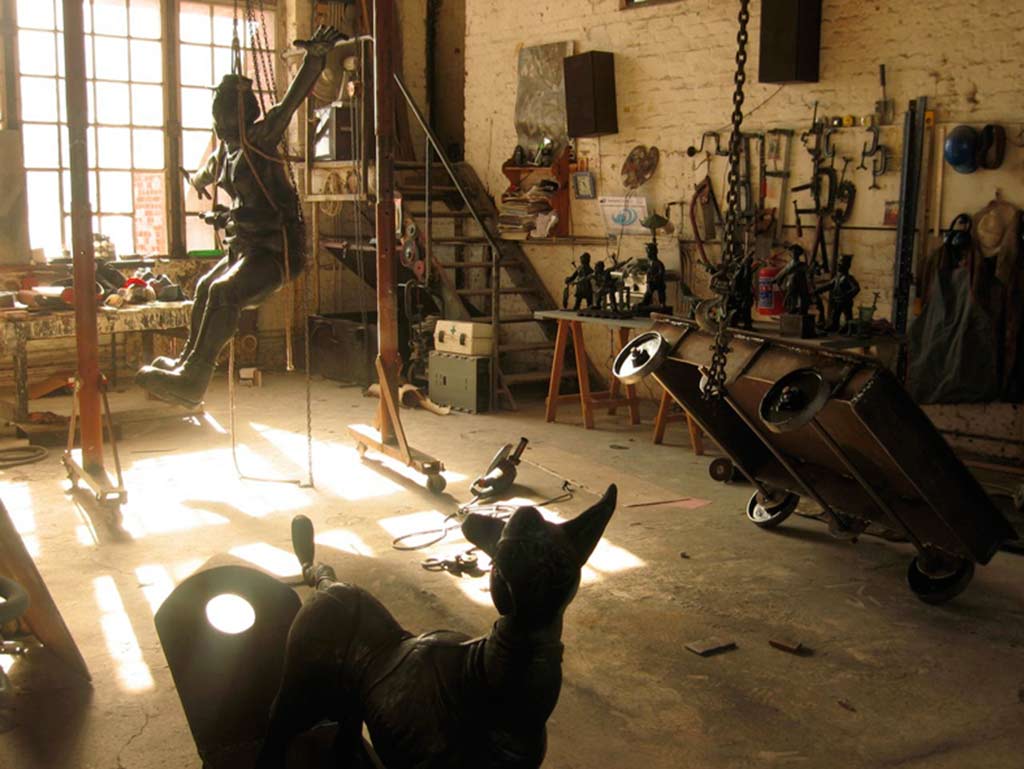 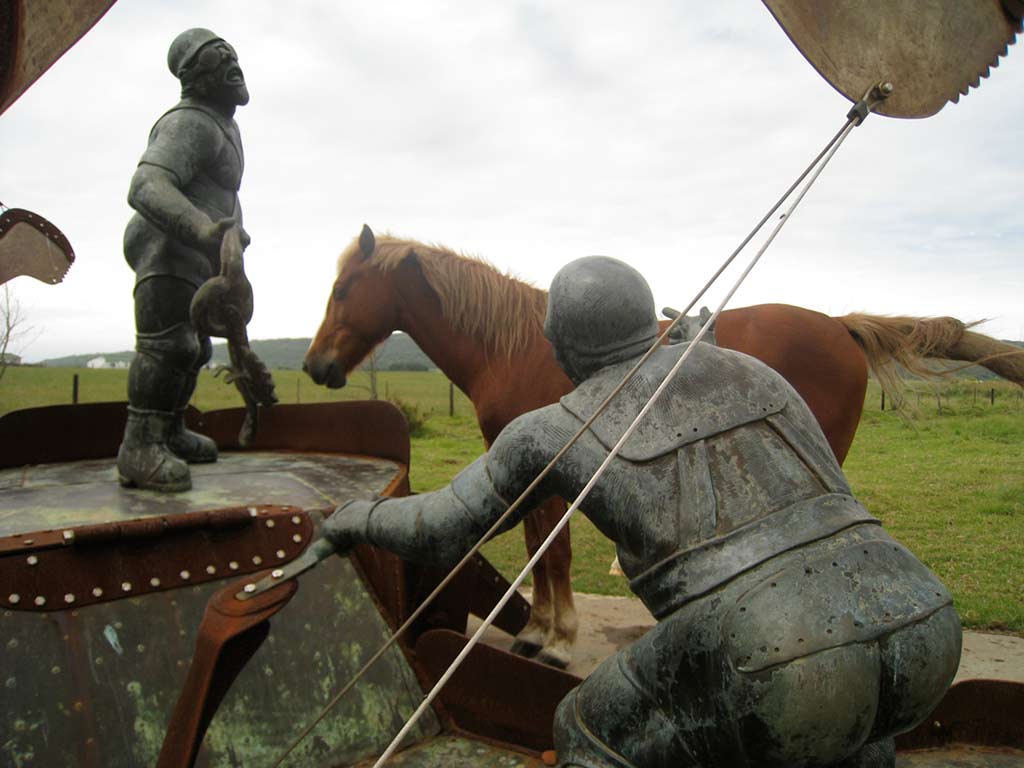 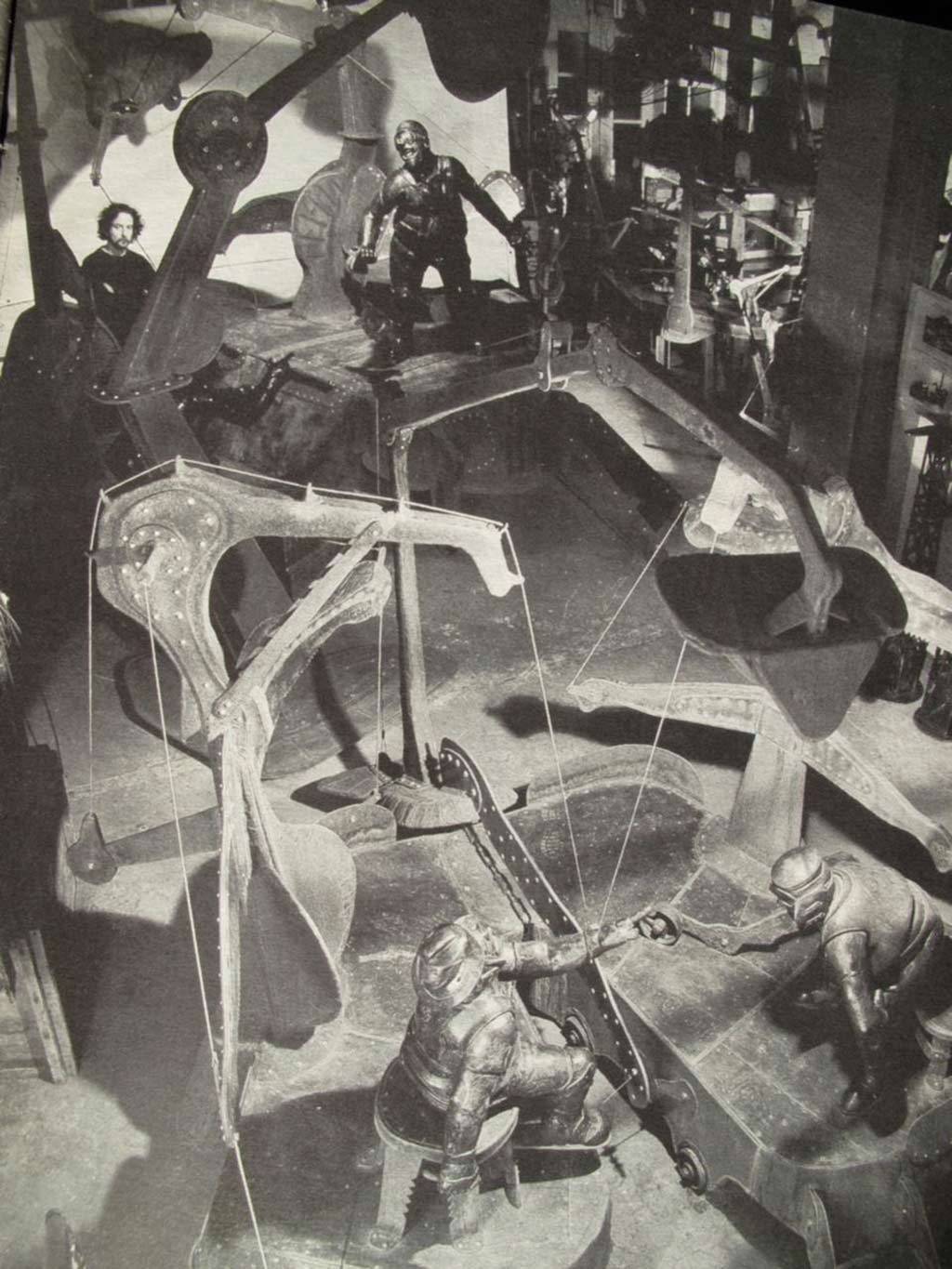 “My first studio stood on the edge of an area known as District 6. Once the vibrant heart of the city, it became a wasteland, a result of a mass removal of people and a striking testimony to South Africa’s racial laws. Small groups of people lived in the street, sleeping in old cars, packing crates, plastic bags, screaming and drinking. A few blocks away, a police compound was often the gathering site of riot-control vehicles and armed men in camouflage uniforms. The images that emerged from observing this strange microcosm seemed to reveal not only deeds of the past and present, but portended events to come.” 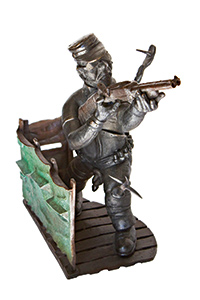 David James Brown was born in Johannesburg in 1951, but has spent his working life in Cape Town. He studied design and photography at the Michaelis School of Fine Art, and was introduced to sculpture in 1975 by Cecil Skotnes.

At around this time he found a studio in an old building on the edge of the business district of Cape Town, bordering the beleaguered District 6 – which at the time was subject to forced removals, the demolishing of houses, the eviction of people from their homes and the breakdown of a community as families packed up to leave for an uncertain future on the Cape Flats.
This studio and environment was to play a significant role in the development of Brown’s work. Just opposite in a plot of fenced ground riot police dressed in camouflage uniform, leaving in their armoured vehicles for daily combat in the townships. Within the low walled boundary of the building and on the opposite pavement, groups of street-people, or strollers, set up home in packing crates or the shells of old motor cars, and in the evenings would make fires in open braziers. Some were disabled, legless, often bandaged, making their way around town in supermarket trolleys. A couple – he a paraplegic, she his companion – slept under his window, and Brown remembers overhearing many conversations in which she would recall fond memories of times when her mother had fried her an egg and bacon, or some other special treat. These people, seldom sober, often harassed by the police, became part of Brown’s inspiration as well as his first real audience. Many befriended him, one man entrusting his monthly disability grant to his care, who then would make regular withdrawals for meatballs from the corner cafe, a new radio, or other expenses. All had comments on the sculptures that were gradually evolving to incorporate the brutality, pathos and disparate community of people that characterised both the area and the time. 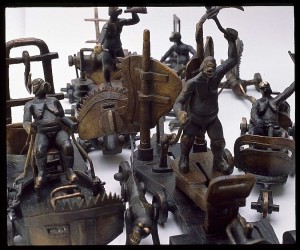 The other occupants of the building also contributed to this strange liming society. His neighbour, an engineer-inventor, had set up a workshop constructed out of old bits of machinery, fridges and other tailored contraptions, and experimented with a form of injection moulding which resulted in bizarre construction of foam, but finally brilliant success. Further down the corridor, a business making burglar bars and security gates flourished. And upstairs a carpenter spent years on creating the interior of a yacht which would finally take its owner away from the chaos that seemed to be the inevitable fate of South Africa.

David Brown’s first solo exhibition Dogs of War (1980) was held in the Goodman Gallery in Johannesburg. These were large brooding sculptures carved from Jarrah and incorporating metal jackets or armour. His first icon was the dog – an animal he was to use as both a symbol of powerlessness and of aggression. Further developed in his series One Man and His Dog (1983) these contrasting attributes – the sense of a loving domestic animal gone feral – lent to the works a quality of menace, as if all that was familiar and dependable was really founded on a deep dark pool of irrational mistrust.

In 1985 David Brown exhibited a collection of bronzes entitled Procession at the Goodman Gallery in Johannesburg and later at the Basel Art Fair in Switzerland. These works, 23 separate pieces linked together as a cavalcade of vehicles, transporting structures and figures – some victims, some victors – to an uncertain destination. Together the procession expressed a medieval quality, at once a parade of the condemned, and triumphant return from a distant battle. They also recalled gladiatorial combat, images from the Inquisition, Breugel’s peasants, drunks and gluttons, and more to the present, Ridley Walker’s vision of post-apocalyptic deranged chaos.

It was at this time that Brown began work on a commission for the Johannesburg Art Gallery which resulted in the monumental bronze and metal sculpture, Tightroping. This work was completed in 1985 and drew on the themes of his previous work. Placed as it was outside the gallery in Joubert Park, the sculpture found a home from home, and was to become the favourite backdrop for photographers in the area. In 1996, one of the figures was stolen, and for a decade or more the sculpture, as such, no longer existed. Then it was found in a scrap yard in Cape Town by artist Willy Bester and was eventually returned to Johannesburg.

The group of work to follow Procession, was titled Voyages (1989). These works took the ship – the Ship of Fools, the slave vessel, the ships of the voyages of discovery – as its central theme. On these vessels, groups of figures work hard; rowing, pulling, hoisting, bellowing, going nowhere. These are ships unworthy to sail, rusted, broken, their sides split open. They are full of survivors, driven crazy by violence, repression, processes of dehumanisation and hopelessness. These ships are destined to sail to no new destination, there is no hope for their human cargo, yet they contain the destruction, as if Brown were symbolically packaging the horror and holding it up for our scrutiny. 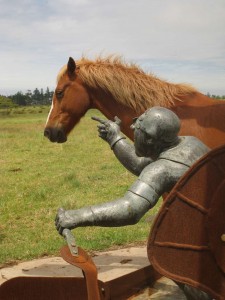 For the next few years David Brown was to work on his biggest and most ambitious sculptures yet. These included the exhibition at the Goodman Gallery entitled Dogwatch (1993) and the Dialogue at the Dogwatch (1995) which was a commission for Hennerton House Estate in the English countryside. The latter piece was two years in the making and covered an area of 30m by 11m with a height of 6.5m. All these works focused on folly, brutality and paradox, with their historical roots in the travelling carnival show or mobile arena here costumed figures enacted a ritualised inversion of hierarchies through ridicule and the absurd. When its owner sold Hennerton House the sculpture was donated to the University of Cape Town when it now resides on the Middle Campus.

With the end of Apartheid, David Brown’s work, never losing its edge, has become more overtly playful. He has continued to work in metals and casting, but from time to time as returned to working in wood, carving and photography. He has made several large commissioned works for collections in Europe and southern Africa and is currently working on a series of portraits – Portraits of Sinners.